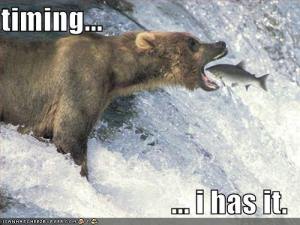 So, I went to the Social Media Club’s tweetup in Bellevue yesterday. Interesting to meet people in person who you may know on twitter.

One of the more engaging conversations was with Pam Hoelzle, who is a business coach based upon her successful — and sometimes unsuccessful — ventures as an entrepreneur. We discussed how entrepreneurs and their companies become successful. Of course, we elaborated on cashflow management, execution of the business idea, planning, as well as eventual relinquishing of control.

In the end, however, we both agreed that TIMING is everything.  She said, “I wished someone would have told me that when I was younger.”

So true. Think about anything significant in your life. Was not the timing critical? One second, one minute, one hour or even a day off and would you not have a different reality today?

In business, I have various personal examples. I was able to sell a relatively small analytics consulting company last March because we had assembled a very talented team. At the time, however, there was also a lot of  buzz around marketing ROI, and acquisitions were rampant with a healthy capital market.  Six months later everything changed. Timing.

Another company (that I follow) has had separate discussions for acquisition with two fortune 100 companies over the last seven years. Each time the discussions went deep into due diligence before unfortunate timing killed the deals (cannot elaborate at this time). The company itself is extremely viable and would have added tremendous value to either of the suitors. Timing.

I try to plan ahead, work hard, be fair to others, and create momentum so that timing can work in my favor. Understanding the direction of your environment is an important way to fit in and open the best possibility of positive timing.

Sound crazy? Then, you haven’t had the experience of letting life work for you. When things are falling into place, you have a calmness of knowing timing is going to make the desired reality for you.

Braised short rib pasta al dente... yum, yum, yum. Thanks @cindy for hosting dinner for Shari's birthday. Paul, Lisa & Maria's arm in the way of my food & wine photo 😏
Thursday night of silly laughs... congrats to the 2 new homeowners! Cheers!!!
Many know about bibimbap, but I grew up with bibimgukso. Noodles mixed in Korean red sauce, kimchee, soy bean sprouts, nori seaweed (etc)... and I like topping it with a New York strip 😋 #comfortfood #koreanfood
Bulgogi burrito. Cilantro rice, salsa, avocado, sour cream, and of course generous portions of bulgogi 🇲🇽+🇰🇷
Only a Korean would post a picture of nang myeun 😋😅 #aquiredtaste
Friends with jets. Thanks Tom for the lift.