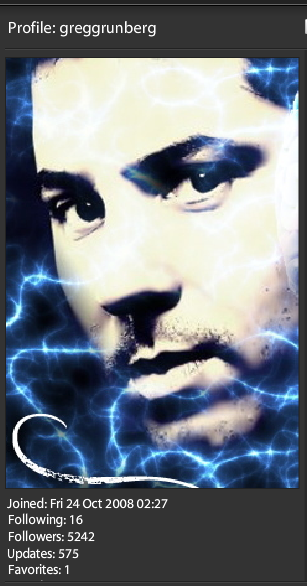 Meet Greg Grunberg, a trailblazer of sorts in integrating social media ever closer with a television show.  Oh yeah, he’s also an actor who play Matt Parkman in the popular television series Heroes.  He plays a policeman who can read and influence people’s thoughts.  One of the scarier powers, I think.

Greg tweets avidly on Twitter, with more than 5,000 followers (and quickly growing).  He tweeted today leading up to the show.  Here’s an example: “Yeah, so here’s the scoop… not spamming! @Heroes is really really good tonight. Don’t say that every week, ya know.”

I must admit having an actor from the show interacting on twitter increased my anticipation for today’s episode.  Brea Grant, who plays the speedster Daphne, also had reminded her some 4,000 followers to watch Heroes tonight.

Interestingly, during the six hours leading up to the show, Heroes was the sixth most popular topic on Twitter, with “Christmas” being the most popular.  According to Flaptor, “heroes” was the ninth hottest word on Twitter during the day behind (work, monday, snow, to work, school, december, obama).

So, I decided to follow #heroes while watching the show tonight.  The tweets came in fast and furious.  I had to refresh every couple of seconds.  I felt as if i had invited people over for a Heroes-watching party.  A lot of the tweets were just people updating their statuses.  However, some were giving continual comments, and I enjoyed several witty observations.  I felt like I was part of a crowd (or tribe, as Seth Godin would prefer).

This was interactive television in a different way.  It wasn’t just voting on reality TV.  It was also different than following a blog during a sports event.  The tweets were a democracy of many different people micro blogging. The crowd came up with its own voice without a moderator.

Initially, many people were annoyed that the eclipse, which took away all the Heroes’ powers, was lasting too long on the show.  One tweet even explained, “According to NASA, an eclipse can never last longer than 7 minutes and 31 seconds. Eclipse STILL going on Heroes :|”.  Haha, that made me laugh.

Then, young women started posting excited tweets with the guest appearances of Seth Green and Breckin Meyer as comic book store workers.  Green had what is bound to be a classic Heroes‘ quote, “Best day ever!” after seeing his comic heroes come alive (sorry, but you had to have seen it).

As the show concluded many tweets called out Hiro, the Japanese youthful Hero, as the reason they love the show.

Throughout, some voiced their frustration over the show, but that is to be expected in an open forum like this.  Actually, i was surprised by the small ratio of negative-sentiment tweets.

Let me get back to my point.  These were the two most interesting tweets: First, “#Heroes FTW! Sylar Down, Syler Down!” after it appeared that a villainous hero turned good hero, Sylar, had died.  Then, “@greggrunberg You were right, #Heroes was great tonight. It’s also neat to see you on Twitter” a follower tweeted to Greg Grunberg, our “trailblazer”.

The first tweet represents the interactive element that can be refined so much more as people on twitter (a tribe) start watching shows together on the social media platform.  The second tweet shows the potential of the  conversation and buy-in that can be garnered by the stars with their followers — a modern, social media way of promoting shows.

This method of interactive television will only become better refined.  Stars will need to be accessible.  Sponsors will need to join in on the tweets about their shows.  And dare I say, do the stars eventually start promoting products on twitter as well?

As one tweet stated, “#Heroes kicked ass tonight!”… yeah, the episode wasn’t bad either despite the extended lunar eclipse.

P.S. While writing this blog post 161 more tweets were posted with “#heroes”.

Three pairs of shoes… on Prom Night
Woke up in the clouds
Happy 2022! So far, so good for this geezer 😄…Hat was a Xmas present 😎
Chocolate cravings for lunch… well, cuz, I totally deserve it ! Happy Holidays 🥳
Good morning Seattle… my you look nice today all dressed in white and blue 😅
#thanksgivingfun #ebikes