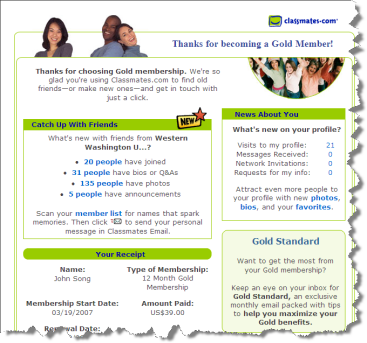 Meet Anthony Michaels, who filed a lawsuit against Classmates.com for false advertising.

For any of you who have signed up for Classmates.com, you know exactly what Anthony Michaels is alleging against the original online social networking company.  Those enticing emails suggesting that friends are trying to get a hold of you are not what they appear.  It’s a tug at your nostalgia to get you to upgrade to a premium Gold membership that requires money.  It’s a deceptive ploy.

I fell for this “tug” a year ago. Signed up for a premium Gold membership, hoping to reconnect with my high school friends.  While I immediately realized no one was really trying to contact me, I remained a premium member and set up a profile to make it easy for friends to find me.  As it turned out, more old friends found me on Facebook than Classmates.com.  So, after a year, I tried to cancel.  That was no easy task. I eventually figured it out after a lot of investment of time.  The whole experience left a bad taste in my mouth.

If a large brand like Classmates.com continues to use shady advertising practices, what’s the true bar within the industry?  Is “Tactless” the bar?

I understand the desire to convert, optimize and convert.  However, that should be done within the context of ethical responsibility.  Build trust with your customers.  Be transparent.

Those of us in the online marketing space need to loudly advocate ethical responsibility even while optimizing our marketing campaigns.

Anthony Michaels’ lawsuit, filed in San Diego County court on October 30, says there are hundreds of thousands of Anthony Michaels around the country who were similarly duped. The lawsuit asks the court to force the company to refund millions in subscription dollars and fine the company for deceptive advertising.

According to Wired, this is not the first legal action accusing a prominent online company of deception. In 2003, Bonzi Software settled a class action lawsuit that alleged its banner ads (which mimicked Windows operating system warnings) were deceptive. And in January, Member Source Media agreed to pay $200,000 to settle a Federal Trade Commission complaint about the company’s spam messages that promised consumers, “Congratulations. You’ve won an iPod video player.”

Stop already!  This lawsuit could raise the standards in honesty in online advertising.  That would be a big step in the right direction.