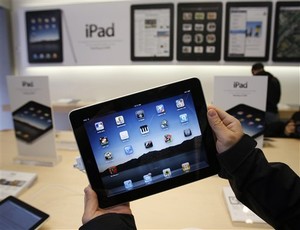 IPad hit the stores with much fanfare. Again, Apple has succeeded in putting together a consumer product that really works for consumers. The interface is amazing. The growing number of applications look promising. IPad is just sexy hot right now.

The web tablet idea has been around for some time. The heavy duty, but clumsy Apple Newton tablet was launched in 1989 and lasted until 1998. That was about the time a Seattle startup company, ePods, came up with another web tablet concept. It was to build a web tablet that was more sleek and easier to use than the Newton.

EPods was an ambitious endeavor. But this was during the late 1990’s when anything seemed doable. The dot com fever had swept through Seattle (and the rest of the country) without rationale, without limitations.

I joined ePods as its first executive, President & COO. The  company, based in Belltown, quickly stirred up a lot of interest from investors and from the media. EPods was building a device that would bring the “rest of the people” to the web. The idea was the light-weight, touch-pad tablet would entice people not familiar with computers and keyboards to get on the web easily.

In terms of execution, there were some big challenges. We had to build a portal site designed specifically for a touch-pad device. The company secured an exclusive partnership with a Korean hardware company to design and manufacture the ePods tablets. We had to develop a launch marketing plan. We had to hire more than 100 employees in a very tight job market.

Everyone worked hard — very hard. It was not unusual to find people burning the midnight oil in the office. People actually looked forward to coming into work. We had a work environment and work culture that attracted some of the best talent around. The energy in the office was both contagious and galvanizing.

We launched the ePods tablet in the Federated Stores in 1999 through our powerhouse distributor, Salton. To our disappointment, the product moved slowly off the shelves. Then, the dot com bubble burst all around us, halting our fund-raising efforts. Soon, it became obvious that we would not be able to secure parts to manufacture more ePods tablets. The endeavor ended abruptly after a last-ditch effort to sell the company to another net device company failed.

There followed subsequent tablet devices like 3Com’s Audry. In terms of concept and vision, however, ePods most closely resembles what iPad brings to the market today. We were just too early.

Rueben, tats with classic rock
Food art in Sejeong, Korea 🙌🏼 ginseng leaves & duk; full course meal in the mountains
Motorcycle ride up the rainforest preserve in the rain… what we found in the jungles of Vietnam were vast diversity of foliage, reclusive rivers, challenging terrain… some inner strength
Paradise Cave. Amazing 19-miles of formations from thousands of years of various water pressure
Commute to work this morning
Stopping to smell the flowers with a lavender matcha this morning. #beautifulmornings #insignia